Dancing at 6:30 in the morning is kind of tough.  First off, I’m not a morning person.  Second, my body isn’t at all warmed up.  I am usually stiff and tight in the muscles and groggy in the brain.  But Ivan, if you haven’t figured it out yet, is crazy, and I guess so am I.  For a while now, we have regularly met at a dance studio on the way to my work, before work.  Location-wise it works out well because it is convenient along the drive to work which is very far from where I live.  And dancing, even at ungodly hours, is better than not dancing, so I’ve agreed to it making sure that on weekends we schedule later in the A.M. so I can get my much-needed beauty sleep. 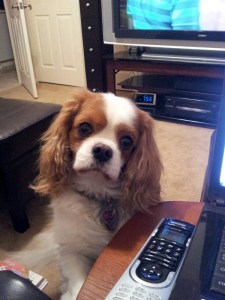 I am trying to write a blog here but this is what keeps staring at me for a treat and she is PERSISTENT!!!!

So today was one of those early days, but surprisingly, it went pretty well.  Even though my right calf is so sore from ballet this weekend that I can’t easily create an up and down motion, Ivan and I danced the Waltz to begin.  On our last lesson I had told him that he needs to correct me all the time, at least one thing in every dance we do.  Otherwise, I will continue to practice the same habits.  Ivan must have heard my request because we actually worked on some new things before the sun came up.

Like I am aware that there is supposed to be a lot of body contact when in frame in Smooth styles.  It’s difficult to maintain and because I only do Smooth, not Standard, and we go in and out of frame frequently, I haven’t been as disciplined as I could be in regards to this detail.  Well, today, that changed.  I think we began with Ivan putting me in a twisted back-bend position, kind of the same position to set up a develope’ and Ivan told me I have to give him my hips.

Intellectually, I am aware of this.  From books, talking with friends who do more closed-frame dancing, I “know” about it.  But it is a whole other level of “getting to know” your instructor when you really have to do this body mash-up.  But that is how it’s done.  That is part of what makes it possible to move as a single unit while gliding across the floor.  And you know what…it actually felt more secure.  To put my hips in the proper position is uncomfortable on some levels, but I felt more stable.  It was almost, well, comforting.

To pull back out of fear in an attempt to maintain space between bodies, puts my body out of alignment, messes with my balance, and makes it more difficult to move.  It was especially weird when Ivan demonstrated the lady’s part, rotating around my left hip, maintaining contact all the while.  I’m pretty much supposed to stick to him (or my partner) like glue.  Though it appears classy and smooth, the dances in hold feel to me more intimate in some ways than the sexy, slinky Latin and Rhythm dances.

Regardless, it was a good notice, something specific I can focus on during practice.  I’m just glad we’ve been dancing long enough now that I feel comfortable being in the proper position.  Well….I did laugh a lot out of nervousness, but still, this is not something that has happened with either of my other two previous instructors.

So after this, we worked on our open Rumba routine.  It is coming along.  I am getting better at remembering the sequence of steps and I’m also getting more clear on the counts.  I am also really excited to do this one move which involves a double Spiral Turn, which is something I really need to practice, but it is going to be so nice when I am more comfortable doing it.  Really, smooth as melted chocolate.

I also made a discovery about how to position myself with my body weight forward on the opening move we do, kind of a reverse turn step with my leg pointed behind me.  It made it look more dramatic while at the same time I felt more secure doing it.  In addition it helped with doing the proper weight changes, not rushing through the movement to the next step, which is for sure one of my bad habits….not living in the moment, not finishing, and rushing to the next thing before the last thing is complete…no I don’t do that in real life either, ha ha.

But the best thing was a new dimension to hip movement that we discovered.  Instead of simply going side to side, front and back, or making a figure eight, my hips are going to lift up as well.  Kind of difficult to describe, but it is very feminine.  Marieta does something similar in one of Ivan and her routines, but it is one of those details you absorb while watching that makes the movement look interesting but that you might not actually be able to pinpoint.  In any case, I do this little hip wiggle after a step turn and this “lifted hip” action was added.

“Then why are you laughing at me.”

“Your hips, your legs, your arms, even your neck moving are all so feminine.  It so natural and so good.  It’s just your face that is looking stupid.”

I guess I make funny faces when I’m trying to be “sexy.”  And the way Ivan was imitating me had me in stitches.  Kind of like a slack-mouthed zombie in search of brains.  Figuring out facial expressions is definitely one of my weak points.  Smiling I can do, no problem.  But looking like I want to attack, or being “sexy” or flirty, not my forte.

Well, I do have awesome hips that work for me, though.  And we incorporated this increased dimensionality into the fan as well.  I don’t find it that challenging.  In fact, it made me feel more secure, and caused me to commit my body weight over my right foot more quickly which also helped me propel myself forward and keep my energy forward.  But Ivan seemed to think it was a special ability.  Well, I’ll take it.  It feels good.  That plus I guess another of his students liked how I styled my arms when we both danced at Galaxy and she told him she wanted to have arms like mine.  Well, that was pretty surprising and also felt good, even if I still have a long way to go with them!

In the end, Ivan said what he’s only said maybe three times before, “I like this lesson.”

“I know!  I wish all could be like this.  So happy, and fun, and discovering new things.”

Truly, it doesn’t happen all that often so when it is nice like this on a lesson I really appreciate it.  It’s not every day that only my face looks stupid!  Usually much more looks stupid!  Heh heh heh.

5 thoughts on “Only Your Face Looks Stupid”