Welcome lucky readers!  Today I have such a treat for you.  I’m very pleased to share this guest post from Adventures In The Dance Kingdom.  His signature blend of hilarious photos of Lego people (including one in a chicken suit!) and tales of his adventures in dancing is most charming and endearing.  I’ was hooked straight away and have enjoyed his blog for a while now so I’m glad I get the opportunity now to share it now with you! Enjoy! 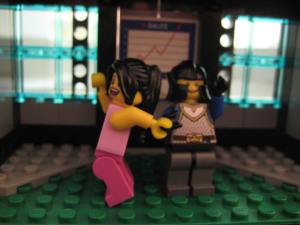 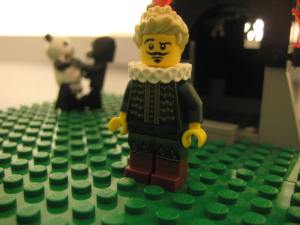 I like to think of myself as just your average yellow-skinned, green tunic wearing 30-something guy who lives in Charlotte, NC. The only caveat to that is that I also happen to spend a lot of time studying how to dance. Specifically, I study the ins and outs of ballroom dancing (as you probably guessed, since this is posted on a site that discusses ballroom dancing). One of those things that I get asked frequently when people find out that I have this hobby is ‘why do you do it?’ Well, aside from my mysterious superhero-like origin story that goes through all the crazy mishaps that led me to this place (it may or may not involve getting bitten by a radioactive dance shoe – I’ll leave that to your imagination), one of the big reasons I dance is really quite simple:

I do it for the ladies.

Now before your mind rolls right down the roof and into the gutter, hear me out. Whether you want to do it socially or competitively, the term “ballroom dancing” covers many those unique styles of dancing that requires two things to make them work properly – someone to lead, and someone to follow. I’m not the type of person to get hung up on specific gender roles, but if you were to step into your average dance studio, the lead is generally given to the male dancers, leaving the female dancers to be the followers. In times of yore, when balls that hosted dance events using the early forms of these dance styles were held, it wasn’t hard to find a male who knew the dance. It was part of their training, being raised among the privileged – the peasantry learned the folk dances that were popular at the time. Today, with interest in ballroom dancing revived through various television shows that I’m sure you’ve heard of, people are signing up to learn these arts once again. You’ll find when you look around that average dance studio you stepped into earlier that the majority of the people who are there learning are women. One might think that, knowing how much women like to dance, more single men would be signing up in an attempt to capitalize on that market. But in the time I’ve been studying to dance in the Dance Kingdom, I haven’t seen all that many men come through – and the ones I have seen tend to not stick with it for very long. I have some theories as to why this is, and the main one is that in the world of ballroom dancing, it is rather challenging being a guy. Let me see if I can describe some of the challenges for you…

One of the things I have run into when talking to people about what I do for fun is the notion many people have about the type of man that likes to dance. Let me give you an example: I remember back to a story Sparkledancer (my competitive dance partner) once told me about discussing her hobby with some men that she worked with, and what it was like to compete with me in the dance competitions we decided to try together. Those guys made some jokes at my expense, asking her if I was an “effeminate” guy. That seems to be a stereotype that men have when they think of male dancers. Now, if you knew me, you would know that I do a lot of physical activity on a daily basis. A lot. So, if I were to pick an adjective to describe myself, effeminate would not be it. What these gentlemen fail to understand is that dancing of this nature is actually a lot of work. It’s not like being in college and going out to a club so you can wiggle back and forth with a girl while drinking. My dance partner was also nice enough to tell me that she made sure they knew that I was far from effeminate, so you don’t have to just take my word for it. 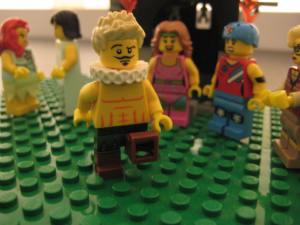 There are also a lot of working parts to dancing that the lead has to keep track of while moving around the floor. I once had a discussion like this once with Sparkledancer about the main differences between being the leader and being the follower in dance. She told me that as the follower, it was her main job to make whatever I was doing look pretty. There’s a lot to be said about that. As a boy, it’s not really in my nature to want to look pretty, so that’s not even close to one of those things I usually think about when I’m on the dance floor. For me, the most important things that I tend to think about are the rhythm and timing, the musical phrasing within the song, what figures I plan on doing next, and (in travelling dances) the positions of all the other dancers on the floor near me. How graceful or emotional I look is kind of an afterthought, and sometimes is even something I rely solely on muscle memory to get across. The follower, Sparkledancer explained, didn’t necessarily need to know in depth things like the names of any of the figures, or the rules of what steps are or are not allowed in each of the International versus American styles of dance, or how the figures I chose would line up with the phrases of the song playing. That’s the sort of thing she would trust in me to do correctly. Her first focus is on the movements of my body in our dance frame, and how she can interpret those movements to know what steps I want her to do. After that, she is concerned with the way each of the steps she does looks, how her extensions are, and the ‘prettiness’ (for lack of a better word) of the movement. Because, let’s face it, most people (male and female) want to watch what the female dancer is doing out on the dance floor during the average dance. I’m more like a dance prop. So the girls really need to make it look good, because all eyes are on them. Next time you happen to be out on the dance floor, whether in competition or socially, take a second to realize how different your thought patterns must be. 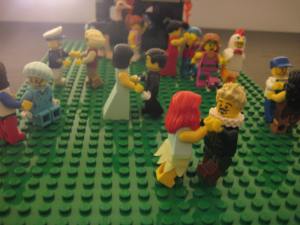 Another big issue that I know also affects the ladies (but in a different way) is that there are just too few men to go around. Our society today foists the idea onto boys that it is important to be manly, and favors ridicule for men who take up “womanly” hobbies. Because of this, right now there just aren’t that many male dancers to go around. As I mentioned earlier, many of the men I see come through the studio just don’t stay around for very long. Some of them leave because it’s fairly obvious that their spouse likes dancing while they don’t, so the men get “voted off the island” (as one female dancer once told me). Some of the men leave out of frustration, because learning new things as an adult is hard and people don’t like sticking around if they can’t get it right away. With so few men available, a guy does get to have a big say with what is going on and who he wants to dance with. With all the men out on the floor dancing, the women that came to the party without a partner are left in the background, eagerly anticipating the time that they will be asked to dance. After all, without someone to lead them, women who learn the follower’s part are stuck just standing there. In situations like this, I feel like I have a responsibility to try and dance with as many women as possible throughout the night. Whether it’s in a group class session at a studio or a social dance event, with women always waiting in the wings to go out on the floor, guys don’t get breaks.

Whew! Hopefully my rambling here gives you a better idea of what I mean when I say that I dance for the ladies. Keep that in mind if you see me stop to breathe a little bit at a dance party.

2 thoughts on “Guest Post: Adventures In The Dance Kingdom!”