Oh my gosh, guys!  It went so great with Damir today!  Yay!  I feel so good about my decision and totally that I am in the right place right now.  He’s just exactly the teacher I need at this point and I think it’s a case of that saying, “When the student is ready, the teacher appears.”

I love how conveniently located his studio is.  That was a nice perk this morning.  We are scheduled to dance three times a week, Monday, Wednesday, and Friday for the next month.  I’m excited about having a regular schedule, which may sound odd, and for a while I really loved being so freewheeling with Ivan, but for now being consistent will move me forward more effectively, I think.

Also, I loved probably every second of my lesson.  I was a little bit nervous as I walked in the door but Damir quickly put me at ease.  He’s a total pro and so comfortable in his role.  He asked me what I wanted to work on, Rhythm or Latin, and I was like, well probably both, but I guess he doesn’t do Smooth or Standard.  That’s okay with me, at least for now.  I am very happy to focus on the other two styles.

So he was all, “Why don’t we do a basic Rumba box,” and I was like, “Great!”  I was glad to keep it simple.  And he had told me during our conversation on Friday last week that our first lessons would not be very physical, they would be assessments of where I am, what I understand.  Because the deal is, I have no idea what “level” I am.  I believe I come to the table with certain skills, and others are lacking.  I have some knowledge base, but there’s still so much I don’t know.  I don’t even know what I don’t know!

Anyways, we did a Rumba box and he didn’t announce it, but he began leading different steps, and I was able to follow…a cross over, an underarm turn, then something I wasn’t sure of but I interpreted as a spiral but I’m pretty sure it wasn’t.  lol.  But he said, “Great!  I followed you well during that Spiral, Stefanie.  You have a lot of the advanced concepts but you are missing the vertical motion.”

“Cool,” I said, hungry to learn what this mysterious vertical motion is.

I’m not sure we actually even made it to whatever that vertical motion is, but I am confident we will get there in due time.  What we did do was get back to the basics and all I can say is Hallelujah!  Damir is big on building a strong, proper foundation, and I couldn’t agree more, especially in terms of where I am with my dancing at this point.  I feel like I can’t really do much more to improve the quality of my dancing with my current skill set and knowledge, all I can do is add more decoration.  But adding more decoration isn’t what I’m after.  I’m after discovering greater control over my body, and my energy.  I’m after being able to wield my instrument more like a virtuoso.  I’m after excellence.

And as Damir says, there’s gonna be a price to pay.  Yes, of course there are the usual prices like time, energy, practice, repetition, being willing to go out of my comfort zone, and being willing to trust my new teacher and the process.  But the other price is to be willing to maybe take a step back or not progress as quickly in terms of levels of dancing, and, even more than that, to be willing to place poorly, at least initially, because I will gain confidence in what I’m doing but it might not be as flashy as before.  To me, it’s priceless to have conviction of how I danced, if I nailed it (or not), and the results are separate from that.  Well, I’m willing to take this on.  In fact, I’m excited about it.

Well, anyways, on the lesson we mostly talked about walking backwards.  It sounds so simple but, as you dancers know, a LOT is going on in even the most simple movements.  It was amazing to discover new things about how I’m stepping, why one thing works and one thing doesn’t.  It was really illuminating.  And the amazing thing about Damir, which really works for me, is that he not only talks about the physical actions, but he also talks about the energetic processes going on.  In fact, he even spoke about my Chakras!  Not your typical dance teacher, but it resonates with me.

I think most of all, Damir helped me feel centered.  He helped me to identify it physically while transferring my weight between my feet, and he also helped me settle into it, from my energetic core.  My last two steps backwards on the lesson were so solid, so centered, and he didn’t even need to look at me to know it.  We both knew it – rather, we both felt it.  And that is something to be excited about!

I think I’m going to have so much fun with Damir.  I think I’m going to discover so much about myself and my dancing with his guidance.  I’m open and ready to receive, hungry for new knowledge.  I also think it will be uncomfortable at times because I will have the opportunity to change the mechanics of how I’ve been doing things, as well as learning how to connect with a new partner.  I mean, at this point Damir feels more like a coach than a partner, and that’s totally cool.  Maybe it will always be that way with him, who knows.  Regardless of how it looks, I’m super excited about this new portion of my journey.

Damir’s also awesome because already I feel like he really sees me.  He’s observed a lot about me, how I do things, my strengths and my weaknesses.  I feel like he hears me already and already he’s been spot on regarding who and how I am even though we never really had any conversations about it.  It feels great to be recognized.

And guess what?!  I have a folder!  I was so excited when I saw it – my name is spelled correctly, and it’s so pretty, and it just feels good that we are tracking what we are doing.  Again, with Ivan it was great to be so free for a time, but now I like the idea of routine, consistency. 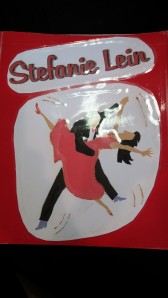 I love how she looks – so free and open and expressive.  Just like I want to be.  It’s the perfect color and it just makes me happy.

So by now you are probably wondering why I titled this post, “It’s a bitch” when things went so well on the lesson lol. Well, I think that’s going to be Damir’s catchphrase.  He said it about 5 times on our lesson hehe.  Basically, he acknowledges that part of the process of becoming a dancer with greater quality and more internal movement is a pain in the butt!  We have to remember why we are doing that same step for the 5000th time.   But the phrase made me laugh.  It’s totally true, and I love how he calls a spade a spade – he’s at least as honest as Ivan ever was.

So that’s the deal, yo!  All good stuff. I’m energized about dancing again, feeling the joy, and, bonus, back on plan with my food and working out.  Things are looking up!

When it comes down to it, I’m proud of myself for making the decision I made, even though it was sad.  Good job, Stef! You’re going places!