Today, I must say, was a good lesson.

I don’t know why some days are just better than others and today turned out to be loads of fun, a good work out, and left me feeling as bubbly as a shaken champagne bottle.

I walked into the studio and caught Ivan doing something in front of the mirror.

“What were you doing?”

After a pause, “Looking at myself.”

That’s Ivan for you!  Unabashed.  I hope to get that comfortable with myself one day.

“I seeing how I look, if I am handsome.”

“Oh Ivan, I think like every female in my life thinks you are handsome.  My mom has mentioned it.  My mother-in-law, when we were at Galaxy, and the subject came up said, ‘I may be old, but I’m not blind!’  Yes, Ivan, I often get comments about how lucky I am to dance with someone so handsome.”

He glowed.  His inner rooster puffed out his chest.  He stood a little straighter.  I think if I can compliment him (or Marietta, or Katie, or whomever is going to dance with him) before we begin at a competition, he’d dance better, with more confidence.  There is something about having your partner compliment you, like what you are doing or how you look, that just is encouraging and invigorating.

“I used to.  But now, even if I say something, she not believing me.”

“Well, don’t worry about it.  Just say something nice and leave it at that.”

Maybe he’ll take my advice.  Doubtful, but maybe.  At least the took the advice in the moment.

So we began with Foxtrot and from the get-go I was connecting and following pretty well.  I was just not thinking, just dancing, just being, and it makes things so much simpler.  The more I get out of my head and into my body, the better I seem to do.  I didn’t even know it, but we were dancing the International Standard Foxtrot.  How could I not know this?  Well, I just thought I was doing a step in the Smooth Foxtrot where you don’t close the feet but pass them.  Silly me.

So I had a moment of brilliance.  I was tuned in, really connected and following, and Ivan moved very, very slowly, leading me into a develope’ at like half speed.  But I did it!  I had great balance.  He was like, “Wow!”

And the best part was, that wasn’t the only “Wow!” on the lesson!!!

Next was the Tango.  Again, good frame, and snap, snap, snap.  My head whipped left and right quick as if I were watching a match between Borg and McEnroe as we went into Promenade and back.  “Good!”  Said Ivan.  Only one small mishap – I kicked him on accident doing some Gauchos.  But he just kicked me back and we laughed.

Then Waltz.  Nothing really remarkable on that one, but I did get to learn a new step with a ronde’ and develope’.

Then Viennese Waltz.  “Sunrise, Sunset” from “Fiddler On The Roof” was the song.  So I started singing.

“It’s from a musical – Fiddler On The Roof.”

“Don’t they have musicals in Bulgaria?”

“No.  No musicals in Bulgaria.”

I don’t know if I believe him, but whatever.  He was so impressed I knew the song.  Why, I wonder?  Most songs I don’t know and he’s never been impressed before.

All the Smooth dances complete, we moved on to Rhythm.

I was enjoying myself doing the Rumba and Ivan encouraged me to dance in 360 degrees.  To pay attention to my back, not just my front.  To make my shoulders and upper back move as much as my feet.  To style my arms so that I don’t look the same as everyone else, because as Ivan puts it, “You not like everyone else.”

I’m getting much better at the Spiral turn, which is a triumph.  It helps just to have that little extra help with balance holding on to Ivan’s hand, but I’m getting more and more independent.  It’s this weird dance between relying on my partner and yet being fully self-sufficient.  Like I could do everything I’m doing on my own, but I’m choosing to do it with a little assist from my partner.  Sometimes it’s not that centered, though, and I rely on my partner too much!  On other moves I try too hard to do it all on my own.  No wonder it takes a long time to develop a proper and good connection, but I digress.

So we were dancing and I was following so well that Ivan, I guess, felt like he could lead me into stuff I haven’t exactly learned.  He dipped me over his knee, and I bent like a wet noodle into a back bend.  It is like I got there and then I realized what was going on.  If I had thought about it, I’d probably have stiffened up, lost my balance, resisted.  But it happened so quickly – quicker than I could think about it, and I did this move I wouldn’t expect my body to do so easily first thing in the morning…or anytime during the day, really.  Once again, I don’t know my own limits.  They are much more expansive than I’d have thought.

“You’ve never done that with me before, Ivan.”  I say as he changes the music.

“I don’t want to telling you so you no thinking.”

Next, the highlight of the lesson.  It rivals the time Ivan taught me the move at the end of the Rumba routine.  The one where I was like, “You want me to do what?”

It was a split.  Him holding me up.  Me giving him my left leg, him stretching me into the splits (I may be bigger, but I’m pretty dang flexible – I can still do the splits, believe it or not!), me opening my arm.

“Wow! This so good!  Why we not put this in our routine?  Fuck!”  He said.  He has that new penchant for cussing, just because he can.  It was a good-natured remark…but “Dang it!” probably would have been more to the point.

He made me do it again, and I was sure he was going to drop me.  I can’t believe he could support all this weight.  Seriously, he was holding at least 90% of me up, maybe more!

Not only did he make me do the split thing, but then he dragged me around, doing this move I’ve seen him do with Marietta.  Now she has a bit more space between her ribcage and belly so she can really collapse toward him, but still, I was impressed he was moving me at all, still holding me up.

“You have to trusting me.”

“Yeah, Ivan, you’re right.  I just can’t believe you can hold me up like that.  It makes me scared.”

On the up side, if I lose more weight then I will really not fear doing these tricks as I’m doing them now and he is handling them.

So we then danced an unremarkable Cha Cha, except I was doing “Pah!” and “Sha!” expressions, practicing the performance element of the dance, and then it was on to Samba.

I ask him to review the step he taught me for the Latin Samba.  We do that and then he starts in on Samba Rolls.  He’s tried them with me once before, but its trial by fire.  He doesn’t show me the move, he just wraps is arms around me and tells me to step, front, side, together, back, side together, while dragging me where I’m supposed to go and twisting my upper body and arms around in a large circle.  It was pretty horrendous, but that’s okay.  After all I did so well today, I don’t mind not getting this one.

The lesson ends and we part with our usual bear hug.

“What are you doing the rest of the day, Ivan?”

“I’m renting a machine to plow the earth.”

Ivan was able to purchase a horse property recently and I’m so happy for him.  It was one of his dreams to have a large property like that and I guess they are putting in irrigation tomorrow so he has to till the earth in preparation.  Not your typical life for a professional dancer, I know, but there’s nothing typical about Ivan and Marietta.  She’s studying astronomy and loves the science of the cosmos.  They have a life outside of dancing, which is not something you usually see in dancers of their level, I think.

“I like this lesson today.” Ivan says as he closes the door and jumps on his Vespa. 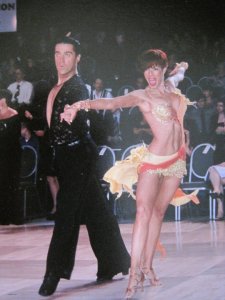