It seems like ages since I’ve created the time to sit and write a post and oh my goodness do I have a backlog of things to share with you today.

So let’s start in chronological order – but I don’t guarantee that I won’t wander. I’ve got lots to cover including a trip to the Vegas Open with Ivan, Marietta, Katie, and Ivonne, maybe 3 lessons with Ivan, a class with Inna, and other adventures in the game called, “my life.”

So, last Friday after work, I hopped in my car and picked up Ivonne. We made the 4.5 hour drive to Las Vegas talking all things ballroom and listening to fun music the entire time. We finally arrived at the Las Vegas Hilton, checked in, and gussied ourselves up for an evening in the ballroom and out on the town. It was Ivonne’s birthday, too! Definitely cause for fun and celebration.

Ivonne and me before the competition

We made our way down to the ballroom and saw Ivan and Marietta briefly for a quick hello.

Ivan and me before the Vegas Open

You know, people who are new to the ballroom world are so fun to be around. Why? Because they say the darndest things! I mean, it can be a little overwhelming to walk into a competitive ballroom for the first time. There is glitz, and glamour, and bright lights, and all this movement and noise.

So anyways, Katie finally made it into town and joined us in the ballroom. Ivan and Marietta were competing in the Open Professional American Rhythm Division, which was scheduled to begin at 10:29pm, one of the last events of the evening. Before that were some higher-level Pro/Am heats, as well as the Open Professional Smooth heats.

We girls settled in to watch the dancing and I’ll never forget some of the funny comments from my newbie compatriots. For instance, during one of the Pro/Am heats Ivonne and I were watching, she blurted out, “They are a hot mess!” I had to giggle. This Asian lady and her professional partner were dancing the Jive. I would have given them a “ten” for excitement and energy, but maybe a “2” for control. They were dancing wildly, off-balance, but man, they were into it!

Then, during the Professional Smooth, Ivonne turns to me and says, “Isn’t there supposed to be a line of dance?” Now, if you’ve ever seen Rising Star or Open Professional Smooth heats, you’ll know what she’s talking about. I had to laugh out loud and even Ivan snickered when I conveyed the comment later on a lesson. You see, the dancing done by professionals looks completely different than that done by amateur students. We students learn syllabus steps. In Smooth, we are often in hold for most of the dancing and we perform steps like the basic, twinkles, chasses, etc. Well, those professionals are interpreting the “feeling” of the dance. They go in and out of hold and do a lot of interpretive steps. Especially in American Rhythm these days there can be a lot of gymnastics going on and hardly any of the basic foundational steps in the dance.

In any case, Ivonne made an astute observation. Those couples were bouncing around the ballroom floor like bonus balls in a pinball machine! Perhaps they were vaguely moving in a counter-clockwise fashion, but truthfully, it was pretty difficult to see.

Katie induced my next guffaw. “What dance was that?!” She exclaimed. Once again, the dance being performed bore little resemblance to the Waltz she has seen and knows. I told her she could tell by the music which dance it was, but without that cue, she’s right. It might have been very difficult for someone who learns syllabus steps to decipher what was going on.

Me and Katie in Vegas

But finally it was time for Ivan and Marietta to compete!

Here they are in the semi-final

Of course they made it to the final.

My favorite couple ended up placing 3rd. They were ranked 3rd in all dances, behind Rado and Devora Pashev and Jason and Sveta Daly.

But, I’m not surprised.

I may be getting a little controversial here, but hey, this is my blog, and I’m allowed to express my opinion. I could have predicted the results. I could have told you before anybody took one step on the dance floor who was going to win and what the placement would be, at least for the top 3 couples.

This is one of the aspects of competitive ballroom dancing that I am hardly enamored with. The part where couples are ranked not always on how they are dancing that particular night, but on a bunch of pre-determined factors. I don’t claim to know all the ins and outs of judging, but even I, novice that I am, know that it gets political. Even I know that it is partially based on past rankings, who is poised to be the next champion as decided by those in power. Get in with the right people, and you have a much better chance at actually winning a competition.

Now this isn’t to degrade the dancing abilities of all the competitors. They have to be amazing to compete on this level. However, no one can always be at their absolute best and if the competitions were based on the dancing exclusively, then maybe the results would vary once in a while, you know?

Anyways, it is what it is. Ivan and Marietta got 3rd. At least they got to stand on one of the giant stacks of poker chips! 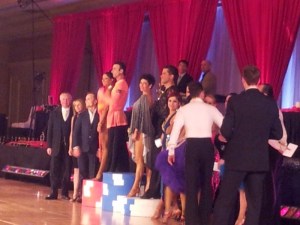 You’d think the adventure would end there – but no! We were in Vegas! It was Ivonne’s birthday. Even if was midnight by the time things were done, we had to go out on the town, right?

Ivan and Marietta quickly changed clothes and we were off, to a restaurant called the Peppermill. I guess it is pretty well known. We noshed on salads and cocktails and shared some very entertaining conversation. Even just getting there, the cab ride, was an adventure. I managed to entertain everyone after 3 glasses of wine by interacting with Lee, our codgy old taxi driver. He was pretty resistant to my questioning about his life at first, but by the end of it, everyone was having a good time. I think Ivonne or Katie even got it on video, which, I’m embarrassed to see, I think. But they thought it was hilarious. And I just won’t tell you what Ivan talked about….TMI! It involved chickens. Have I mentioned that Ivan keeps chickens? Well, they are not very good at “bringing him eggs.” He discussed various ways he had attempted to increase their egg production. Nuff said.

We must have looked an odd group at the diner. As Marietta commented on my Facebook page, she and Ivan looked like “orange weirdos.” See for yourself:

This one is of all of us looking nice.

And this is the one of Ivan being Ivan.

We finally made it to bed at 3:30 am with plans for breakfast around 9 am the next morning. Surprisingly we weren’t dragging all that badly. Some food at Ihop, dessert in Paris, Paris, and we hit the road for the drive back to Phoenix.

It’s times like this with friends, doing things I love, that I really appreciate life. I’m so glad I decided to go, “just because,” to support Ivan and Marietta, and that both Ivonne and Katie were able and amenable to coming along for the adventure as well. I hope there will be more joint ventures in the future. This is a special part of my “ballroom family,” and I can’t think of a better way to spend a weekend than to share it with those I cherish having in my life.

Well, I guess that’s enough story for now. It seems like a good place to stop. But like I said at the beginning of this post, I have a lot more to tell you about. I’ll end here for the time being but stay tuned – more to follow shortly!